Brewery Near Me - Find Nearby Breweries & Get Discounts

"Brewery near me" is a popular search to find local breweries worth visiting. Breweries are venues that brew their own beer on-site and serve itto patrons, and they may or may not also serve food. You may also beinterested in "craft breweries near me." A craft brewery, also called anano-brewery, produces beer in small quantities with an emphasis onexperimental and bold flavors. Keep reading if you want to findbreweries nearby in Portland and Seattle.

Pup Passport is a digital brewery passport that helps you find dog-friendly breweries. Not only that, but you'll get a discount at thebrewery just for showing your passport. Finding nearby places to grab apint of beer with your dog has never been easier. Pup Passport has over50 craft beer locations that you can visit in Portland Oregon, plus over20 in Seattle Washington. 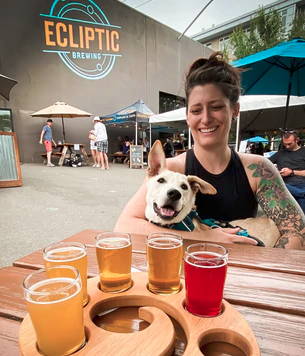 Portland Oregon breweries are a major attraction in the Rose city. Portlandis Oregon’s biggest city and sits on the Columbia and Willametterivers. It’s known for its bridges, dog-friendly culture, and of courseits many microbreweries. With over 70 breweries in the city alone, it'sno surprise that the region is heavily influenced by the craft beerindustry.

Portland even has its own official brewery passport to help youfind breweries nearby, called Pup Passport. The appropriately namedpassport program only features dog-friendly breweries, and many beerlovers use the passport whether or not they own a dog.

"And while the passport calls itself Portland, it’s generous with that boundary, pulling in further afield breweries such as Wolves & People Farmhouse Brewery in Newberg."

- The Oregonian via oregonlive.com
Read More

Seattle Washington breweries are a major attraction in the PudgetSound area. Seattelites flock to local craft breweries in increasingnumbers, and many are even dog-friendly. Seattle is often thought of asthe big brother of Portland due to how closely their cultures arelinked. Both cities have a similar political climate, similar weatherpatterns, are both known for craft beer and dog-friendliness.Seattle sits on the Puget Sound in the Pacific Northwest just 3 hoursnorth of Portland. It is surrounded by water, mountains, and hasthousands of acres of parkland. Seattle is Washington State’s mostpopulated city, partly due to its booming tech industry.

Seattle has its own official brewery passport to make iteasy for you to find nearby breweries to attend. The appropriately namedPup Passport only features dog-friendly locations, and boasts 50% offyour first beer at 20 locations.

"The service is pretty straightforward: The digital Pup Passport resides on your phone and guides you to confirmed dog-friendly spots. You show it to participating breweries to get discounts on beer and other perks."

benefits of breweries near me

Why look for "breweries near me?" Breweries are a huge attraction, especially now that people are trying to get out of the house post covid-19. Breweries are a unique experience from your typical bar environment. Breweries only serve beer (and cider) as opposed to mixed drinks, and they brew all the beer on-site. Craft beer does not have a long shelf life, so it can be a real treat to grab some fresh craft beer from a local brewery. Craft breweries prioritize bold and experimental flavors, whereas breweries like Annheiser Busch just crank out the equivalent of rain water in a can. But hey i'm a little biased.

A "beer passport" is a collection, or booklet, of places that serve beer in a given region. For example you can search for a beer passport in Portland Oregon if you want to find local breweries to visit. Sometimes beer passport programs offer discounts on drinks. They are also usually themed. Pup Passport is an example of a beer passport, because it is a collection of breweries (places that serve beer) and also offers discounts at each location. We find that physical booklets are a bit outdated. We prefer digital passports because they can be updated on the fly - add new places, remove old ones, etc.

Craft Breweries Near Me

Craft breweries have long been known for their laid back, welcoming culture. They often invite dogs as well. If you're looking for a craft brewery near you, then you're in luck. Pup Passport helps dog owners and beer drinkers alike find the best spots in town to grab a pint, and at a discounted rate, might I add. Pup Passport members enjoy 50% off their first pint at 20 Seattle craft breweries, plus all kinds of discounts on beer and flights at over 50 Portland-area breweries and taprooms.

A "Hop Passport" refers to a booklet or digital collection of craft breweries, or places that serve craft beer. This can also include independent taprooms. A Hop Passport typically refers to  a passport program that can bring you to places that serve craft beer, and may or may not offer a discount at each venue that you visit. Pup Passport is an example of a Hop Passport, since it is a curated list of themed (dog-friendly) breweries where members enjoy discounts at each taproom.

Back to Pup Passport Blog